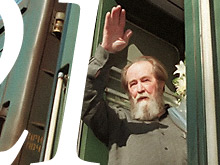 On July 21, 1994, Aleksandr Solzhenitsyn returned to Moscow after spending 20 years in exile in the United States for writing his book “The Gulag Archipelago”, which gave a devastating description of life in the Soviet prison camps.

The Nobel Prize-winning author had arrived two months prior in Vladivostok, Russia’s Far East, and then took a journey across Russia via the Trans-Siberian Railway. Solzhenitsyn stepped off at Yaroslavsky Station in Moscow and was greeted by thousands of people crowded outside to witness his triumphant return. They gave him flowers and praised the writer, holding posters that said “Thank you Solzhenitsyn! He described our suffering and exposed the Gulag camps to the entire world”

In 1991, the year the Soviet Union fell apart, Mikhail Gorbachev dropped the treason changes against the author and restored his citizenship. Solzhenitsyn had experienced the horror system of Stalin’s labor camps first hand, and was the first author to reveal to the West the grisly realities of the “Gulag” (Chief Administration of Corrective Labor Camps and Colonies).

Before becoming an author, Solzhenitsyn was first a prisoner himself. A World War II veteran, he spent eight years in a prison camp after being sentenced for criticizing Joseph Stalin in his private letters with a close friend.

Solzhenitsyn considered himself a witness, one of many, who had suffered in the remote Siberian camps. He saw his mission as writing about his experience as a Gulag survivor. In 1962, he published “One Day in the Life of Ivan Denisovich”, a novel which gives an account of a day in a Gulag prisoner’s life.

Just after his next most famous book, “The Gulag Archipelago”, was released in 1973 to the West, Solzhenitsyn was arrested by the KGB, his work was labeled anti-soviet propaganda, and he was charged with treason and exiled.

After his final return home, Solzhenitsyn emerged as a critic of Russia’s post-Soviet government, and especially of then-President Boris Yeltsin. "I have concluded Russia is in a very serious condition,” he said shortly after arriving to Moscow. “There are groans resounding across the country…Nobody expected the way out of communism would be painless, but nobody expected it to be so painful…The government is not fulfilling its duties."

Solzhenitsyn even refused to accept the Order of St. Andrew award (the highest civilian award in Russia) presented to him by Yeltsin in 1998. But he remained an isolated figure in Russia, as a nationalist who - although he was often called the nation’s conscience - was no longer quite in tune with modern Russia.

The man who survived the revolution, war, the Gulag, cancer, pursuit by the KGB and exile, died on August 3, 2008, at the age of 90. The collected works of the Russian author comprise more than 30 volumes. He was a writer, a historian and a social philosopher who was not afraid to reveal the truth about the monstrous place that was the gulag.