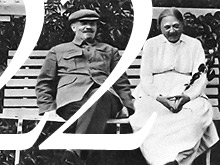 On July 22, 1898, a wedding ceremony took place between Vladimir Lenin and his ideological “friend, comrade, and sister” Nadezhda Krupskaya. The couple tied the matrimonial knot when both bride and groom were in exile.

Lenin owed his acquaintance with Krupskaya to Apollinaria Yakubova, a young and beautiful girl, who Lenin had an affair with. Krupskaya, a teacher at the evening school for workers, just like her best friend Yakubova, was once invited to a secret revolutionary party, where she met Lenin, “a very interesting young man”, a revolutionary from the Volga region.

“I first saw Vladimir Ilyich at the Shrovetide party,” Nadezhda Krupskaya would recall, “…it was decided to hold a meeting of several St. Petersburg Marxists with a visiting guy from the Volga region. We made a pancake party for conspiracy…”

Still in love with Apollinaria, Lenin was flattered and touched by Krupskaya’s support and loyalty. While dating Yakubova, he very much enjoyed revolutionary talks and home-made delicacies Krupskaya treated him to. A real feat of compassion Krupskaya performed when Lenin was put into prison in 1895.

As Krupskaya herself reminisces, “When [the prisoners] were taken outside, a tiny strip of the street could be seen from one of the windows. So he wanted us – me and Apollinaria Aleksandrovna Yakubova – to come to that spot at a certain time every day, so he could look at us. For some reason Apollinaria was unable to come, while I kept coming for several days and spent a lot of time on that little spot.”

It is still unclear what forces bound the two together. Some sources say Krupskaya had fallen deeply in love with Lenin right after the legendary Shrovetide party; others say she was being rational, hoping through marriage to become a part of his great revolutionary future.

It is unclear why the marriage actually happened. Some historians claim that in Krupskaya Lenin saw just right combination of dedication and responsibility required for his revolutionary purposes. Others claim Krupskaya was the one to pop the question before he was sent into exile, to stay together. When she herself was exiled to the city of Ufa, she requested the officials to join her fiancé and moved to the village of Shushenskoye – his place of exile – with him. She was only allowed to spend the exile together if she was married to him. In July of 1898 Lenin and Krupskaya became man and wife.

Local peasants were witnesses at the wedding; the bride was wearing a modest white blouse and a black skirt, while the groom had a battered brown suit on. Instead of diamond rings, they exchanged simple copper ones, made of old coins. As a wedding gift, Nadezhda brought a lamp with a green lampshade – a legendary accessory which became part of Lenin’s entourage both in fine arts and literature. Some sources say the wedding was very modest and quiet, with the newlyweds only helping themselves to a cup of tea. According to others, the party went out of control and gave the neighbors a lot of trouble.

The young wife remembered her honeymoon as very eventful, as she and her husband “would study Webb from the early morning”, then “copy editions of “Development of Capitalism” together”, and have occasional strolls in the evenings. Still, she did not deny presence of “poetry and young passion” in their relationship.

Though a faithful friend and comrade and a right hand in his revolutionary activity, Krupskaya failed to be a perfect wife in the traditional sense, which eventually drove Lenin away to search for love in the arms of the beautiful and passionate Inessa Armand who he had met in Paris in 1909. Either Krupskaya’s devoted love or her revolutionary ambition stopped her from objecting to this romance. She never left Lenin and stayed by his side till his last days.