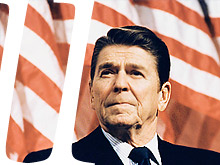 On August 11, 1984, as he prepared for his weekly address on National Public Radio, then-US President Ronald Reagan made his legendary voice check, when, instead of uttering the usual “testing,” declared: "My fellow Americans, I'm pleased to tell you today that I've signed legislation that will outlaw Russia forever. We begin bombing in five minutes."

The recording of the joke, though not broadcast over the air as was the common misconception, was still smuggled to the outside world, provoking a general embarrassment worldwide.

The moment the president's flippant remark was released, it immediately caused a stir both in the United States and abroad. Most international media responded with outrage, fearing that the joke about "outlawing" the Soviet Union had once again put the two superpowers on the verge of a third world war.

Upon hearing the news, a leading Parisian newspaper, suggested in dismay that Reagan’s jest be tested by a trained psychologists to determine whether it was “a statement of repressed desire or the exorcism of a dreaded phantom.” As the imminent danger of such a comment was obvious, a Dutch news service ironically remarked, "Hopefully, the man tests his missiles more carefully," referring to the possibility of the Soviets turning their weapons toward the US after hearing such a threat.

A representative of the Green Party in Bonn remarked that “blood freezes in one’s veins on the mere hearing of this disgusting joke of the American president.” The Green Party of the Western Germany, known for lobbying for the halt of the American medium-range missile deployment on the country’s territory, also compared Reagan to Adolf Hitler. The Labor Party of Great Britain encouraged then-British Prime Minister Margaret Thatcher to tell Reagan his black humor was no fun for the Brits.

Such a thoughtless act also jeopardized Reagan’s chances to win the upcoming election, as all of his associates in the White House were upset to see how Reagan had put his future presidency at risk. Democratic Party officials were amazed at the carelessness with which the president joked about the war with the Soviet Union in the presence of other people, let alone journalists.

In the Soviet Union, too, Reagan's joke provided for a vast amount for contemplation. The Izvestia newspaper claimed that “the slip of the tongue of the American president is not merely an example of ‘black humor,’ or a tasteless joke. Reagan’s words are the creed of the American imperialism stripped of all the propaganda camouflage; moreover, it’s the most hostile and irresponsible wing.”

The Pravda newspaper, the major country’s sounding board, remarked outrageously, “Behind the thick wall of silence, the White House is trying to hide from a wave of contempt. The people both inside the United States and outside are overwhelmed, responding to Reagan’s cynical act, which screamed about the irresponsible attitude of Reagan’s administration toward the burning political issues… the American administration is trying to get around it, as, according to NBC, the comment Reagan had tossed so casually about America bombing the Soviet Union seems to have been taken seriously by the world community.”

Ironically, it was Reagan, also known to have referred to the Soviet Union as an "evil empire," who built a close personal relationship with Soviet leader Mikhail Gorbachev and went as far as signing the Intermediate-Range Nuclear Forces Treaty in 1987, which eliminated an entire class of nuclear weapons.