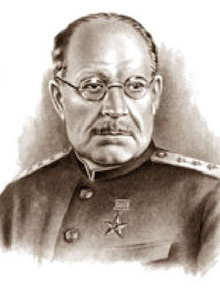 Nikolay Burdenko was a military surgeon, who became the father of Russian neurosurgery, founder of the Soviet Medical Academy, and the Soviet Healthcare System as a whole.

Nikolay Burdenko was born into a poor family of a village scribes in the governorate of Penza.  The Burdenko family had been serf peasants, which was more or less equivalent to the status of a slave in Imperial Russia. When Burdenko was only 5 years old – he went to school on his own. The teacher thought he was still too little to attend classes and sent the boy home. Burdenko came every day and waited at the classroom door. Finally, seeing the extraordinary perseverance, the school director gave in and let enroll the boy in school.

Upon graduating, Burdenko had no choice but to go to a theological seminary. Coming from a poor family he had no way to pay for any other kind of education. Nevertheless, lack of means did not take away diligence from the young man, and the industrious Burdenko finished the seminary with honors. As a promising student, he was then sent to the Theological Academy in St. Petersburg; however, at this point he decided to change the course of his studies and went to the University of Tomsk to study medicine.

Young Burdenko was fascinated with the surgeries performed by his professor and surgeon Vsevolod Salishchev. He decided to follow in his teacher’s footsteps and become a surgeon. This required a deep knowledge of human anatomy and Burdenko fully immersed himself into studies, spending the next 3 years of his life dissecting bodies and learning how to conserve organs.

Burdenko’s hard work paid off, and soon he was appointed an official assistant of the chief anatomist of the University. Despite such a bright beginning, further success did not follow. In 1901 Burdenko participated in student demonstrations against the autocratic government and was kicked out of the university.

During the Russo-Japanese war 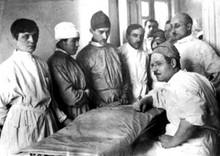 When the Russo-Japanese war began in 1904, Burdenko went to the front in Manchuria as a doctor’s aide. While saving lives in the battlefield, he was injured in the arm. For his courage Burdenko was awarded the Cross of St. George.

The war experience left a deep impression on Burdenko, later he shared his thoughts in his works, “We lost 25 thousand injured in the battle all because we had only one thousand carriages to transport them.” He constantly quoted the great surgeon Pirogov saying “it’s not the medicine, but rather the administration that is the deciding factor in providing aide to the injured.”

Upon his return in 1905 Burdenko went straight to the Tartu University in Estonia to finish his studies. He successfully passed the exams in 1906, received a Doctorate degree with honors, and stayed on at the University to work. He went on to do research for his thesis called The consequences of dressing the Venae Portae. After defending his thesis he continued following his research with practical medicine achieving a virtuoso level in surgery techniques.

Despite the medical traditions set up by his predecessors, incidentally both Nikolays - Pirogov and Sklifosofsky, Burdenko travelled abroad to perfect his knowledge and skills.

At the start of the World War I Burdenko had already become a name in the world of surgery. Right from the onset of the war he set up a surgery team and went out to the battle scene. There he set up a special hospital for those requiring neurosurgical assistance, which allowed him to expand his surgical skills and make all kinds of discoveries in the field of brain injury treatment. Several of procedures were eventually named after him.

During the First World War medical assistance to the injured was so poorly organized in Russia that the Army was seriously threatened by the absence of human resources. Only 50 percent of all the injured returned to the war. These horrific statistics helped perpetuate the general perception of soldiers – they were regarded merely as cannon fodder.  The state departments responsible for health in the military required a total restructuring, for which there was no political will.

In 1917, Burdenko made a public report to the representatives of government ministries. In the report, he presented a detailed analysis of the inefficient delivery of medical help to the army during war.  He was especially troubled that many soldiers died of blood loss before they could even reach a point of medical assistance. While at war, he personally walked around the battlefield after the fight to look for the injured and help them on the spot.

The Founding of Neurosurgery

After the war Burdenko went to Moscow where he headed the Faculty of Surgery at the First Moscow Medical Institute. In 1934 he set up the first ever neurosurgical institute which developed a new field of medicine – neurosurgery. In 1941 for his outstanding work in neurosurgery Burdenko received the Soviet Order of First Degree.

Despite the injuries he received during wars, Burdenko retained his extraordinary working capacity. “He who works is always young. Sometimes I think that labor produces special hormones, which heighten life impulses,” was a saying of his. 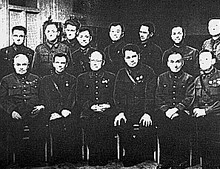 First conference of war surgeons. N. Burdenko is in first raw in the middle. November, 1942

When World War Two started, Burdenko was already 65. He was appointed the head surgeon of the Soviet Army. He went straight to the front and personally implemented new and recently discovered medicines such as streptocide, sulfidine and penicillin. Soon he made all military hospitals use these substances, which saved thousands of lives.

In 1941 he suffered a concussion during a bombing. Age, years of hard work, and previous injuries had a cumulative effect on him, and Burdenko suffered two consecutive brain hemorrhages as a result. However, he was still strong and continued work despite his ailment. In 1944, following Burdenko’s plan, the Soviet government founded the first Academy of Medical Sciences, electing him as the first president.

In January of 1944, Burdenko’s name became the center of an international scandal linked to the Katyn Massacre case. It was an investigation into the mass grave of thousands of Polish officers found in 1942 by German troops near Smolensk.  Following the exhumations, the Germans refused to take responsibility for the murders and accused the Soviet forces.  The Soviet government in turn denied the accusations and formed a special commission, headed by Burdenko to investigate into the case. 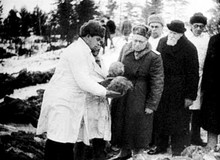 The official report by Burdenko’s commission concluded the Polish officers were killed by the Germans, an idea strongly opposed by the USA and the International Court of the Hague.  Only in 1991 after declassification of the archives was the truth established – some 20 thousand Polish officers had been murdered on orders of the Soviet government upon their occupation of Poland in 1939.

The archives also contained a report dated 1946 from the then terminally ill Burdenko, in which he shared with his friend who had defected from the USSR, “Following the personal order of Stalin I went to Katyn where they had just excavated the graves. All bodies had been buried 4 years before. They died in 1940… For me, as a doctor, it was an obvious fact, which I couldn’t doubt. Our comrades from the NKVD [KGB predecessor] made a big mistake.”

In the summer of 1946 Burdenko suffered a third brain hemorrhage. It appeared to be the end, however, even on his death bed, he managed to write a report on fire injuries. By that time he was so ill that he was carried to the 25th All Soviet Surgeon Conference, where his report was to be presented. Almost deaf, and with poor speech, Burdenko could only communicate through written messages. His report was presented by his colleague. Ten days later Burdenko died at the age of 70 years old.

Nikolay Burdenko was so highly valued by the Soviet government that he was awarded with practically every honor existing in the country - Stalin’s Order, three Lenin Orders, Hero of Socialist Labor to name a few.  Burdenko was also an honorary member of the Royal Society of London and the International Society of Surgeons. There are many streets in Russia named after him, as well as hospitals, schools and scholarships.  The world famous Institute of Neurosurgery in Moscow and the Central Military Hospital of Russia also bear his name.

Burdenko was one of the first to perform surgery on brain tumors, and treat oncological diseases of the central and vegetative nervous system. He invented bulbotomy – a surgery in the upper part of the spinal cord, which required incisions of the  nerve tracts attached to the brain.

He also wrote more than 400 works on medical research, which to this day helps doctors solve complicated cases.

Burdenko’s diaries contain a message, which he had once copied from Anton Chekhov, “Man must consider himself above lions, tigers, stars and above everything there is in nature, even above things that are impossible to understand and things which appear miraculous. Otherwise he is not a man, but a mouse, which is afraid of everything.” Perhaps his life story is a vivid demonstration of the wondrous capacities hidden in a man and which are discovered upon his selfless service.