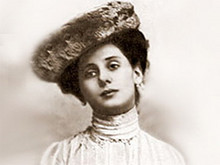 A fragile girl who was at first denied entry to the Russian Imperial Ballet School due to the delicacy of her constitution, Anna Pavlova became one of the most famous classical ballet dancers in history and was a mystery both during her lifetime and after her death.

Her very birth was the first in a long line of myths connected with Anna Pavlova and her personality. Little Anna was born two months premature and as a newborn she was wrapped in soft wool instead of napkins. She was later quoted as saying it was not wool, but swan down. If this is true, it would prove to be quite symbolic for the ballet dancer whose signature piece would later become the role of the dying swan in Swan Lake.

It is known that Anna’s mother Lyubov Pavlova was a laundress, while the identity of her father remains unclear. It is debated whether he was Lyubov’s married husband Matvey, a soldier in the Russian army, or Lazar Polyakov, a banker at whose house she was serving prior to Anna’s birth.

When Anna Pavlova was eight she had an opportunity to watch Sleeping Beauty by Tchaikovsky at St. Petersburg’s Imperial Mariinsky Theater as a gift from her mother. It was there that she fell in love with ballet once and for all. From that moment on, Anna would rave about dancing and persuaded her mother to take her for an audition to ballet school – but she was refused entrance because of her young age and fragility.

The future ballet star was a slender girl with an “airy” constitution, while at that time a strong build was considered necessary for a dancer in order to perform complicated movements and figures.

It was the great ballet master Marius Petipa who recognized her talent, and Anna was finally accepted as a student in 1891. Studying at the Imperial Ballet School with its iron discipline was very hard. The students had to get up early in the morning, take a cold shower, eat breakfast and after that started lessons which would last until evening, being interrupted only by dinner, performances, and brief walks in the fresh air.

Spare time was rare, and Anna Pavlova usually devoted it to reading and sketching. Besides, she worked especially hard to train physically, as her body build remained so fragile that fellow students even gave her a nickname – The Broom. 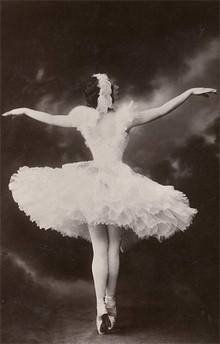 For a very long time Anna believed that her technical proficiency was curtailed by her physical abilities until one of her teachers, Pavel Gerdt, told her, “Let others perform acrobatic tricks. The thing you consider to be a shortage in reality is a rare gift which singles you out from thousands.”

Anna graduated in 1899 at the age of 18, and her graduation performance in Pavel Gerdt's Les Dryades prétendues (The False Dryads) was so successful that they were allowed to enter the Imperial Ballet Company. Anna Pavlova was accepted as a coryphée – a ballet dancer ranking above a member of the corps de ballet and below a soloist.

In the next several years she performed in such ballets as The Pharaoh’s Daughter, Sleeping Beauty, La Bayadère (The Temple Dancer) and Giselle. The public at the time was used to academic ballet performances, and Pavlova’s different style which paid little heed to strict academic rules made a splash. She could dance with bent knees, bad turnout, misplaced port de bras and incorrectly placed tours, but her amazing physicality and the spirituality of the characters she created delighted the public and impressed critics.

At the heart of her talent was sudden and instant inspiration. More often than not she was improvising, and could not repeat the pattern of her dances despite requests from her masters and partners. Later, when Anna Pavlova started teaching, this gift seemed to be a great obstacle as her students couldn’t copy the movements that she herself didn’t remember.

In 1907, Pavlova made the next step towards her worldwide fame – she started going on tours abroad. Her first tour was to Europe. The ballerina later recalled the tour included performances in Riga, Copenhagen, Stockholm, Prague and Berlin, and everywhere her dancing was met with enthusiastic reception.

In 1910 Anna Pavlova left the Mariinsky Theater and made her own ballet company with Russian choreographers and predominantly Russian dancers.

Despite her “airy” appearance, Anna had a strong and sometimes feisty character, teasing even the man who she devotedly loved – Victor Dandré.

The son of a French immigrant, he was a successful businessman. It was rather common for men of high society to become admirers of famous ballerinas, but Dandré felt a genuine passion for Pavlova. He bought and equipped a ballet studio for her and gave her many expensive presents.

Some time later, it accusations were made that he embezzled public money and was threatened with debtor’s prison. Anna Pavlova suddenly signed a very oppressive contract with an agency in London and paid off Dandré’s debt, after which he became her lifetime impresario, and as he confessed after her death, her husband. However, documents were never produced to confirm his claims.

When not on tour, they lived in Ivy House cottage in London, a mansion with a beautiful park full of flowers and a pond with snow-white swans.

In 1914 Anna Pavlova visited Russia for the last time in her life. She performed in Moscow and St. Petersburg. The Mariinsky Theater was willing to resume their contract with her but the deal was complicated by the fact that they would have had to return a considerable sum that the ballerina paid when she tore up her previous contract with them.

Pavlova’s company triumphantly toured many countries in Europe, Asia, and both Americas, among them the USA, Mexico, India, Egypt, China, Japan, South Africa, Australia, New Zealand, Cuba, and the Philippines.

Their schedule was very tight. They gave performances almost every day with very few exceptions. During 22 years of such touring life, Pavlova covered a distance of more than half a million kilometers and gave some 9,000 performances.

There was a period when a ballet toe shoe maker annually made about 2,000 pairs of slippers for her, and they were only nearly enough.

During her tours, Anna Pavlova often had to perform without a proper stage, in inappropriate conditions, and even in the rain, but she would always perform regardless of the conditions even in fever, with sprains, and a broken leg.

During a tour to the Netherlands, the 49-year-old Pavlova died of pneumonia in the Hague on January 23, 1931, leaving behind a legend with a unique, inimitable style only the ballerina Anna Pavlova could embody.

It is believed that her last words were, “Prepare my Dying Swan costume!”