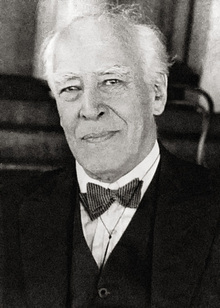 Defined by many as the father of psychological realism in acting, Konstantin Stanislavsky honed his renowned method within the Moscow Art Theater, which he co-founded in 1897. Stanislavsky’s system has become known worldwide as one of the most effective in the study of the art of acting.

Konstantin Stanislavsky was born into a wealthy Russian family, the Alekseevs, in 1863. Stanislavsky was his stage name, which he took to preserve the reputation of his family; they were not ashamed of his work but in those days in Russia acting wasn’t considered an honorable activity. He strove all his life to change that perception and to show what a profound and difficult profession it is. Konstantin’s father owned factories that manufactured gold and silver braiding for military decorations and uniforms. Stanislavsky first performed as an actor at their home theater built for the entertainment of the family and friends. It was then that Konstantin started what would become a life-long series of notebooks filled with critical observations on his acting, aphorisms and problems. And it was from this habit of self-analysis that his world-famous system later emerged.

Stanislavsky preferred not to attend university, but worked in the family business. Although in 1885 he studied briefly at the Moscow Theater School where students were encouraged to mimic the theatrical tricks and conventions of their tutors. Disappointed by this approach, he left after little more than two weeks. 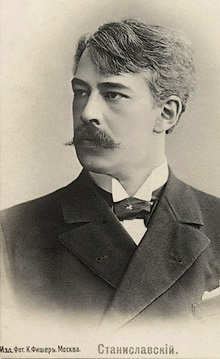 By the age of twenty-five, Stanislavsky was well-known as an amateur actor. With the resources of his family, he invited some of the most creative people in town to establish a society that would unite amateur and professional actors and artists. They called it the Society of Art and Literature. It had a dramatic, an operatic and a musical section, as well as one for graphic arts. The drama and opera sections each had a school. To research the curriculum of the Society's drama school, Stanislavsky spent the summer of 1888 studying the classes and performances of the Comédie-Française in Paris. The Society's school was to offer classes in dramatic art, the history of costume, make-up, drama, Russian literature, aesthetics, fencing and dancing. Under the auspices of the Society, Stanislavsky performed in plays by Molière, Frederick Schiller, Aleksandr Pushkin and Nikolay Ostrovsky, as well as gaining his first experiences as a director. With the guidance of his fellow Society directors, Stanislavsky finally abandoned the operatic conventions and theatrical clichés in his acting that he had mimicked from other actors' performances.

In 1889, Stanislavsky married Maria Lilina (the stage name of Maria Perevostchikova), with whom he had just performed in the Society’s production “Intrigue and Love.” Their first child, Ksenia, died of pneumonia in May 1890. Their second daughter, Kira, was born in 1891. Three years later Maria gave birth to their son Igor.

While working on Aleksey Pisemsky's historical play “Men Above the Law,” Stanislavsky discovered his "principle of opposites," as expressed in his aphoristic advice to the actor: "When you play a good man, try to find out where he is bad, and when you play a villain, try to find where he is good.” Stanislavsky insisted that the actors learn their parts thoroughly, almost entirely removing the prompter from the Society's productions.

Birth of the Moscow Art Theater 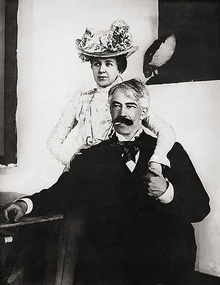 In 1897 the notorious Moscow Art Theater was born out of an eighteen-hour conversation between Stanislavsky and a successful playwright, critic, theater director and acting teacher at the Moscow Philharmonic School of Music and Drama, Vladimir Nemirovich-Danchenko. Stanislavsky later compared their discussions to the Treaty of Versailles, their scope was so wide-ranging; they agreed on the conventional practices they wished to abandon and, on the basis of the working method they found they had in common, they worked out the policy of their new theater. Together they would forge a professional company with an ensemble ethos that discouraged individual vanity, selecting actors from Nemirovich's class at the Philharmonic school and Stanislavsky's amateur Society of Art and Literature group, along with other professional actors; they would create a realistic theater of international renown.

Stanislavsky’s system is based upon three sections, three books, two of which were published posthumously from his essays, articles and notes.

•       “An Actor Prepares” (1937) - explains how the actor must psychologically and emotionally prepare for a created role. Once it is created, the actor must personally develop it until he feels comfortable living as someone else. Actors must ask themselves “What would I do if...?” based on the circumstances surrounding their character. The System describes this as a personal reality. 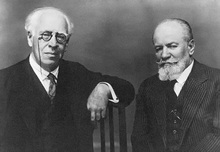 •       “Building a Character” (1949) – deals with the external training an actor undertakes to communicate different aspects of a role. The stress here is on a physical and vocal approach to the role and how far these aspects can change to display aspects of the role while remaining in the character.
•       “Creating a Role” (1961) - gives detailed examples of how the System can be applied to various roles. The actor must make the role fit the script, but only after preparing the role and assuming it both physically and vocally. The actor must effectively consider and approach each line and every pause from the character's perspective. This helps the actor gain proper access to the subtext.

The System uses a balance between an actor's personal experience and an attempt to imagine being in their character's situation. The actors could not merely rely on observation and imitation, they had to emotionally feel the role of their characters and recognize themselves in it, not just think of the part but also live it. Stanislavsky stressed that no part of his three-part system take precedence over another part, as this would create an imbalance. All aspects of the System must systematically engage together. 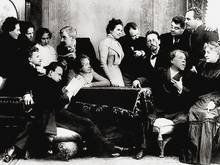 Psychological realism exposed hidden conflicts within relationships. The Moscow Art Theater loved to stage Anton Chekhov’s plays, to such an extent that it became known as the House of Chekhov. They produced Chekhov’s “Uncle Vanya,” “Three Sisters” and “The Cherry Orchard.” During the build up of major political change in Russia at the beginning of the 20th century Stanislavsky mirrored social issues on stage like 1905's Bloody Sunday, when a peaceful demonstration of workers carrying a petition to Emperor Nicholas II was gunned down by the Imperial Guard, and the more influential Red October of 1917, which revolutionized the country into Communist rule. Konstantin survived the consequential violence due only to his close allegiance with Lenin and his theater began producing plays containing Soviet propaganda. In 1918, he established the First Studio as a school for training young actors, still trying to gain acting rightful recognition as a serious profession. In 1938, a month before the open declaration of World War II, Stanislavsky died believing in a peaceful, socially-responsible world that exchanged its works of art. His books have now been translated into over 20 languages.