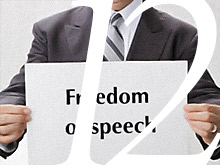 On June 12, 1990 the Supreme Soviet of the USSR passed a law on mass media, completely abolishing censorship and introducing freedom of speech.

Censorship was first instituted by Catherine the Great in 1796 when she set limits on foreign book imports and dissolved private publishing houses that she herself had sanctioned 13 years earlier. Ever since, relative thaws in freedom of speech have alternated with crackdowns. Emperor Alexander I passed a “mild” law in 1804, which would “interpret ambiguities in the favor of the writer” followed by the “cast iron regulations” of 1826 passed by Nicolas I. The subsequent Emperor, Alexander II also loosened up censorship, with the measure mostly affecting educational establishments; under Alexander III, laws were once again tightened. Not only was literature a subject of censorship, but also diplomatic and private correspondence. Employees of the so-called “black offices” opened, read and rewrote every letter, displaying the highest level of proficiency: in one day 12 people could manage some 2-3 thousand letters.

Between the years 1905 and 1917, at the dawn of socialism, censorship was twice abolished only to come back and blow out of proportions in the 1930s – 1950s; not only were books repressed and authors banned, but the mere mentioning of them could entail criminal liability. The entire branches of humanitarian sciences had fallen into disgrace.

The specially designed censorship bodies thoroughly screened all mass media and visual arts, like cinema or theater. The major targets for censorship in the Soviet Union were anti-Soviet propaganda, military and economic secrets, any information that could form a negative image about the country, like economic problems, social unrest, international tension and even major natural disasters. Altering the approach, the Brezhnev era censorship focused both on what was actually written, broadcast, or said, and on what allusions it could produce in people’s minds.

The situation improved significantly with Mikhail Gorbachev’s introduction of the "glasnost" principle in 1986, followed shortly after by the Supreme Soviet’s law abolishing censorship. The scope of openly discussed issues had by far widened in 1990, as scientists, journalists, and deputies argued about public control of security agencies and produced alternative interpretations of Russian history.

In modern Russia censorship doesn’t exist, however, some publications may be banned by a court order if they stir up hostility, social, religious or national intolerance or contain violence or abuse.