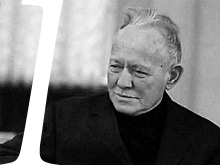 On June 1, 1965, Russian novelist Mikhail Sholokhov was awarded the Nobel Prize in Literature for “the artistic power and integrity with which, in his epic of the Don, he has given expression to a historic phase in the life of the Russian people.”

Sholokhov was born in the land of the Cossacks and in his works made the river Don and those who lived there famous. He made his literary debut in 1925, publishing a collection of stories “Donskie Rasskazy” (Tales of the Don) about the civil war and the Cossacks of his native region, but the work that brought him international fame was the four-part novel “Quiet Flows the Don” (Tikhy Don) which he began writing in 1926, when he was only twenty one.

It took him 14 years to complete. In order to collect material for this book he examined documents in archives, listened to the tales of his Don Cossack neighbors, and read newspapers from the tsarist period. Sholokhov's deep feeling for his land and for the people of the Don Region is shown throughout “Tikhy Don”. The book is filled with descriptions of nature. “Of the Russian authors I have read, Sholokhov is almost the only one with a highly developed sense of locality,” eminent American writer and critic Malcolm Cowley said, adding “But besides his sense of locality, he also has a sense of people that is somewhat commoner in Russian fiction, though rare enough in the literature of any country. He writes about them as if he had always known and loved them and wanted the outside world to understand just why they acted as they did.”

Sholokhov's epic portrays the life of the Don Cossacks during World War I and the Bolshevik Revolution. The main character in the story is Grigory Melekhov, a young Cossack so overwhelmed by conflicting loyalties that he comes to believe that all is meaningless. His ambiguity, contradiction, and emotional struggle made him one of the most famous tragic heroes in Soviet literature. This novel became one of the most well-read works of Soviet literature. Sholokhov’s fame extended far beyond the borders of the Soviet Union, earning him the Nobel Prize and subsequently the book was translated into more than forty languages.

Somewhat overshadowing his success was accusations of plagiarism by another Russian novelist and Nobel Prize winner Aleksandr Solzhenitsyn. He claimed that Sholokhov’s novel “Quiet Flows the Don” was written by another novelist who died in 1920 and that Sholokhov found the manuscripts and published it under his own name. Other critics implied that he was too young to have written such a great novel and saw as evidence of his plagiarism the lesser success of his later works. These rumors appeared in the late 1920s, and there are still disputes today on whether he was the true author of the masterpiece. Apart from that Sholokhov constantly battled with censors and was forced to make revisions to the original text of “Quiet Flows the Don”. He revised the novel extensively to abide more closely with the Communist Party views and Stalin’s “socialist realism”, and then again worked significantly to return the novel back to the original after Stalin’s death in 1956.

His other major works include “They Fought for their Country” ("Oni srazhalis za rodinu"), “The Fate of a Man” ("Sudba cheloveka") and “Virgin Soil Upturned” ("Podnyataya tselina"), some of which have been later adapted as motion pictures, operas and plays. He lived in his home village of Veshenskaya in the Rostov-on-Don region until his death on February 21, 1984. Sholokhov summed up his work as a writer saying “I would like for my books to help people become better, become purer in their souls, and waken love for the human kind…If I was able to do that in some way, I am happy.”