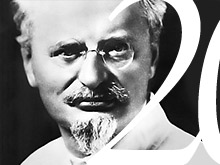 On August 20, in 1940, exiled Russian revolutionary Leon Trotsky was fatally stabbed by a pick of an ice axe in his skull. The next day Leon Trotsky died. His assassin, Ramon Mercader, was a Spanish communist and a secret service agent of the Soviet Union.

Trotsky was the leading man in the 1917 Russian Revolution, the architect of the Red Army and a powerful war commissioner. After the death of Vladimir Lenin in 1924, a bitter fight for power broke out between Trotsky and Joseph Stalin. Eventually the majority of Bolshevik party members sided with Stalin, who became the Communist leader and exiled Trotsky first internally and then abroad in 1929.

During the next 10 years Trotsky traveled through various countries of Europe. Being very cautious, he constantly changed homes while engaging in subversive activities. He emerged as a scathing critic of Soviet leadership and wrote many articles incriminating the new leader. He also established the Fourth International, an international communist organization which opposed capitalism and Stalin. All the time Trotsky was living in exile, the Soviet NKVD secret police kept a watchful eye on him. When he finally settled in Mexico, Stalin gave an order to kill his old enemy, declaring him a spy and a terrorist.

After the first assassination attempt in May 1940 failed, Stalin handed over management of the operation to an experienced spy, Naum Eitingon (also known as Leonid Kotov), who recruited his Spanish contact Ramon Mercader for the job. While Eitingon taught him all the tricks in the art of espionage, NKVD members Pavel Sudoplatov and Lavrenty Beria devised an assassination plan titled “Duck,” which placed Mercader in the leading role.

Mercader was first sent to Paris under the guise of a businessman named Frank Jacson. There the handsome agent befriended Sylvia Argeloff, a woman who was working in Trotsky’s entourage, providing Mercader with the perfect opportunity for gaining access to Trotsky's inner circle.

In Mexico, Mercader posed as a supporter of the Fourth International and Trotskyism, writing papers on the subject. He had often visited Trotsky, asking for criticism on his manuscripts. The guards at Trotsky’s villa became so familiar with Mercader that they didn’t bother searching him when he came to the house on the day he finally put into action his devious plan.

As Trotsky was reading over the manuscripts that day, Mercader struck him in the skull and according to his later testimony, heard the longest and loudest scream he had ever heard in his life.

“I have been through the guerilla war and had stabbed a guard during the Spanish civil war, but Trotsky’s scream literally paralyzed me,” Mercader later said. “That scream will stay with me for the rest of my life.”

Mercader thought that the blow would take care of Trotsky, but it didn’t. Trotsky got up, managed to bite the hand of his assassin, ran through the door and collapsed in the next room. The bodyguards set upon Mercader and beat him savagely, but Trotsky stopped them. He said “Don’t kill him! He has a story to tell.”

But Trotsky would never hear it. The best surgeons in Mexico operated on his skull, but the damage to his brain was too severe. Leon Trotsky died on the August 21, 1940. A telegraph message addressed to Sudoplatov was sent to Moscow that same day reading, “The duck has flown away!”, confirming the success of the operation.

Mercader was arrested and sentenced to 20 years in jail. Throughout his trial he insisted he was Jacques Mornard and that the murder was his idea alone. Mercader claimed that he had hit Trotsky with the ice axe because he suspected his fiancée Sylvia to have been involved in a love affair with him, and that the murder was an act of revenge and jealousy. Even after his true name had been established by the Mexican authorities in 1946, Mercader never admitted to them that he had been ordered by Stalin to murder Trotsky.

After serving his full sentence in a Mexican jail, Mercader was released in 1960 and flown to Cuba. From there he was secretly transferred to Moscow, where he was awarded the Order of Lenin and the Hero of the Soviet Union medal for his “devotion to Communism and the Soviet Union.” Mercado accepted a job at the Institute of Marxism-Leninism in Moscow. In the middle of the 1970s, Mercader was an advisor to Fidel Castro and moved to Cuba where he lived until his death in 1978. His ashes were transported to Moscow and buried in the Kuntsevo Cemetery under the name of Ramon Ivanovich Lopez.

Only after the fall of the Soviet Union, when KGB achieves were opened, were historians able to discover details of the assassination and trace all the steps taken in preparation for Trotsky’s murder.